Maysa Daw is a Palestinian Singer/Songwriter from Haifa. She performs both as a solo artist as well as with the renowned Palestinian rap group DAM (Da Arabian MC’s). We sat down to discuss the sense of responsibility Maysa has as a female Palestinian musician, and the path she is treading to encourage a sense of self love.
I love singing, it the thing I am most grateful for in the world and I think choosing a career in music has given me a responsibility that I very much respect and love to be a part of.   Being born and raised as a Palestinian in Israel, I was immediately put into a place where there are political tensions that you cannot ignore.  I have a voice that potentially can reach a lot of people and I think there are many topics that are important to talk about. You don’t have to agree with me but I want to encourage others to take a small step outside of the box that we are living in, to alter our mindset. For me, it’s not about proving anything to anybody, but to teach ourselves and those around us to say “let’s think differently for a moment”.

In my solo music, I don’t think I can talk about the political reality of Israel and Palestine as strongly as we do as a band. The three guys behind DAM are all insane lyricists (brothers Tamer and Suhel Nafar, and Mahmood Jrere) who share a point of view. They come from Lod, in central Israel, which is a tough area with a high presence of drug crime and it’s very far from my own reality. In Haifa (an hour and half north of Lod), its chilled, you can go out more freely without feeling the same dominance of political tension. So since joining DAM, I’ve learnt a lot by hearing how they think, work, write and live. Knowing how they make and present their music has helped me think about how I can do what I do and how I want to do it.
The first time I realised what it is to be a Palestinian female singer was when we released the song “Who You Are” in 2015, which talks about patriarchy and women’s rights on a global scale. Before that, I never questioned that being a Palestinian female singer could be different from being a male singer. But after releasing the song, we ran a social media campaign #Who_You_R encouraging fans to send videos of themselves challenging traditional gender roles. In this moment, I realised I may have a role that I hadn’t recognised or thought about; an image that I could do things with. Originally, my main aim was to make music, that was it. But with time I’ve understood more of the responsibilities that I have and also the responsibilities that I can choose to take. 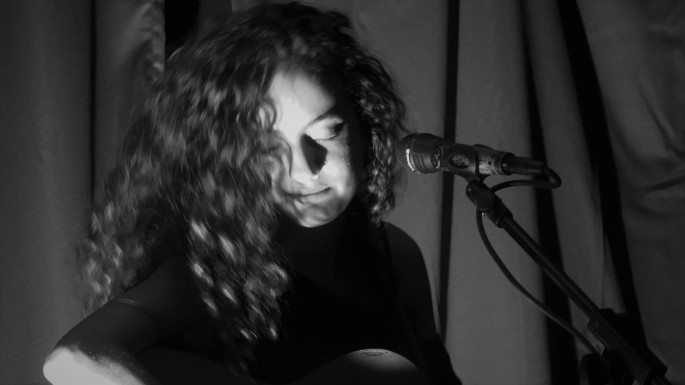 When making music with DAM it’s more obvious; we have a topic we want to talk about, we work on the feel of the beat, we write the lyrics and we create the track this way. When I make music alone, it’s a different process that becomes less about what I want to say to the world and more about what I want to release from myself in that moment. I feel I have the freedom to explore everything I’m feeling on the inside, into the song. Being with DAM has really given me this courage to make music both as something to say to the world as well as a personal exploration. Sometimes, I want to be Maysa and make music that is more personal, where the lyrics are as confused as my state of mind. So it is by exploring my weaker side, what my privileges are and where my power lies that allows me to try and find a way to use these elements in the best way.

Of course I have moments of doubt, not only in my career but also in my sense of self confidence. We’re all struggling to find peace with ourselves and sometimes we can have low self esteem. But I think the worst thing we can do is critically compare ourselves to others. I catch myself doing it sometimes and I’m like “Maysa, stop it! Don’t do that!”. I think it’s about letting yourself be who you are and letting yourself look the way you look.

“Being with DAM has really given me this courage to make music both as something to say to the world as well as a personal exploration.”

I never really liked wearing make-up. If I was going to a wedding, my mum would encourage me to look nice and wear a little bit of mascara, so I would. But at some point, it became an ideology; I don’t want to wear make-up so there’s no question about it. It doesn’t matter if it’s my sister’s wedding (and it was my sister’s wedding and I said no) because I realised that I do have a bigger role right now. If I want to end the unrealistic standards of beauty that we live by, I should start actively changing my own approach instead of just talking about it. So by doing this there’s a tiny hope that it would inspire other girls to feel the same. I think it’s ridiculous that we feel ashamed about things that we all have, like the black bags under our eyes, getting pimples, uneven skin tones. These are things that we all have in common so why should we feel ashamed of it? We should be able to accept it and let it be, that’s beauty.

One of the biggest inspirations for me has been the Black Women’s movement in the US, campaigning to encourage females to love themselves as they are; their hair, their skin, their body shapes, their individuality. When I was at school, it was the norm for everyone to straighten their hair. When I was 16 I started wearing my hair as it is, big and curly, whilst almost everyone around me had this perfectly smooth straight hair. I revisited the school to pick up my sister recently and when I looked inside I saw that 99% of the girls had big curly hair and funky carefree looks. I’m thinking “Holy fuck, it wasn’t like this when I was at school!”. It really filled me with hope; that 14/15 year old girls are actually loving their natural look and letting it run free and wild.
I think social media brought us to a really dark place of unhealthy comparisons, but it also offered the key to get out of it. We’re always sharing and starting to see beautiful ladies with curly hair going viral, so little girls will start thinking, “Yea, I’ve got curly hair like that, and she’s beautiful, maybe I can be beautiful too”. Each person is very different and when you appreciate each others uniqueness, it gives you inspiration to help acknowledge what makes you special.

I think women everywhere are starting to love themselves more (at least the people around me are so I really hope it’s on a bigger scale!). For me, a big part of loving myself is treating my body right, with love. I look after it, I eat well, I don’t fill it with poison or diseases through processed food or dairy and meats. This awareness of treating my body right was prompted from being diagnosed at 12 years old with Lupus, a disease where your immune system fights itself. I was put on a prescription of two pills per day, which I was to take for the rest of my life. However, at the point of diagnosis, my father would always say “Relax, you don’t really have anything wrong” and I took on this positive mindset. Within two months the disease had gone into sleep mode and since then it doesn’t bother me in my daily life. I have been vegetarian for nearly 8 years now and vegan for 6. I dropped down to taking one pill a day and it was when receiving much better results in my blood test that I saw the benefits of these changes.
For me it was always so obvious that I wanted to do music because I love it, but it’s not the only thing I want to do for the rest of my life. There’s more and more that I’m interested in. This past year I’ve been educating myself about homeopathy and dietaries, continually searching and sourcing new information. I want to learn about healing through sound and vibrations; it amazes and fascinates me! I’m 26 and I’m supposed to be aware of what I want to do. But right now, it feels like it’s just the beginning.

Interview and artwork by Bethany Burgoyne